Needless to say, the final weeks of 2014 were a bust in several ways.  There were things to discuss, but nothing was positive and our drafts listing is filled with half-written posts.  But it’s a new year and I’ve decided to dive back in as a manner of expressing myself again. So let’s talk.

What’s Yo (Relationship) Status at the Bank?
Guess who happens to still be single in the most vivid way imaginable?

Over the course of the holidays, it was almost as if everything I did involved hanging with couples, listening to the drama between couples, or getting advice on how to end up in a couple.  It was harsh to say the least.

Even worse, I realized that my type is still relatively elusive.  While Class may try to act like my requirements for dating are obscure, they are actually not that bad.  But the two requirements that are most important to me seem to be the hardest to find.  Internally motivated and an interesting conversationalist seem to be rarities these days.  Lacking in these areas render even the most superficially attractive specimen useless in my world.

But the largest obstacle standing in my way is my reluctance to put myself out there.  For many years, it was fear of rejection that held me back.  That I was too big or not attractive enough to be worth anyone’s attention.  As I’ve gotten older, I’ve realized that I’m okay looking.  I’m relatively funny.  I’ve got some things going for me.  Also, I’m Important.

Seriously though, I’ve exhausted my desire to go out.  I’m tired of checking apps and dating sites.  I’m just in this place where I’d rather not be bothered.  That attitude doesn’t fix the situation, but it is where I’m at these days.  We’ll see what changes this year.

On Blackness
This blog isn’t even a year old and we have a full archive on Race Issues.

But it seems 2014 was the year where racists just said “Fuck It” and went hard in the paint to make America  unsafe for Black people. I remember back when President Obama was elected, there was a mixed feeling of elation and fear.  One of the biggest lessons I’d learned was that when white people feel a loss of perceived power, they lash out.  No matter what.  Whether it’s getting angry and upset with harsh words and attempts to ruin the victor’s credibility or attempting to utilize the one perceived slight as an example of how hard they have it, it is going to happen.  The only other reaction I’ve ever seen is the defense “I’m not racist, I hate everyone.  Racist comment, racist comment, racist comment.”  That’s probably the worst of all.

But to keep myself from going full-on thesis, here’s Miles Jai:

I’m using these as examples because I’m trying to swallow this rage and keep it trucking. But the end result is that people are pissed at the injustice.  And no one cares how much it inconveniences you.  Our lives are at stake.  Until there is real change, there will truly be no peace. 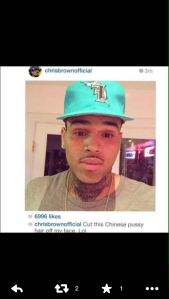 “Cut that Chinese Pussy Hair off my face. Lol”

When I tell you that Sass and I cackled for hours on end over the Lispy/Fanny Pack brief separation.  But something about this douchey face and the Lol sent me over the moon.

Both of these people truly need to leave their lives off the internet, but for the first time in ages, I laughed at their antics instead of rolling my eyes.  The involvement of Drake. Her tears of melancholy and faux-inspirational Instagrams from the Jhene Aiko playbook of songwriting.  The phrase “Chinese Pussy Hair”.  This is classic.

2014 also saw the breakup of Amber Rose & Wiz Latifah. I like Amber and Wiz is entertaining to look up so hopefully things will be good for their baby.  However, this my friends:

is good times. I love this like I love cheese.

In The Presence Of Mirrors – PM Dawn

Ugh, love this group so much.  I wore my aunt’s cassette for “Of The Heart, Of the Soul, And of the Cross” out when I borrowed it back in middle/high school.  They have an interesting way of speaking about life and love in a way that’s emotional and masculine if that makes sense.  It’s melodic but it’s funky.  It’s definitely a product of the early 90’s free-for-all music scene. I’ll leave the song’s interpretation up to you, but this song still takes me to a place of wondering who I am and what I’m doing.

With my very public love of Craig David, I don’t think it is surprising that UK Garage music appeals to me. Artful Dodger did some production work on Craig’s first album too, but it wasn’t until much later that I took a dive into his singles. I love the softness of his production, the abundance of harmonies, and his ability to give songs a groove while downplaying the drumbeat. It’s all very lush, if that makes sense.  This song makes me happy.

So what’s happening in your world? Are you looking forward to 2015?