Hey folks, it’s November.  Trash’s favorite month of the year!  But it seems like the past few weeks have been full of things that piss me off.  Let’s discuss.

Social Media Trash
Now one thing you all know is that Tumblr and Instagram are sites where people have absolutely no couth.  There are blogs out there specifically for posting Catfish’ed nudes.  We constantly see “Post Bad Bitches” accounts.  It’s a part of life that is treated with stunning regularity.  What’s worse is that people are now using these platforms to “communicate” with other participants.  Let’s talk about one specific instance I saw this week.

While scrolling through the Tumblr, I saw an ask.  And I quote

Now for those of you who don’t know who Jordan Calloway is, he was in that Drumline 2 movie and looks like this:

So you know, I can understand being a little thirsty.  However, what I do not understand is your snap judgment of his sexuality based on your irrational decision to send someone you don’t know footage of your vagina monologues.

WHO IS RAISING YOU?

Seriously, I get that there is a feeling of “intimacy” because we can now “interact” with celebrities and even fine ass regular people via these platforms. But what I don’t get is this sense of entitlement that suggests they have to respond to you no matter what you send.  If you think they are attractive, that means they are OBVIOUSLY attracted to you and are willing to spend their time interacting with a nameless, faceless other. This is regardless of sexuality.  They don’t owe you a laundry list of their sexual preferences or histories.   They don’t owe you nude photos.  They don’t owe you anything.

THEY DON’T KNOW YOU!

Someone told that youngest Jenner girl they wanted to eat chocolate pudding out of her behind.  At the age of 16.  You know that you all don’t have to actually say these things to these people.

I’ll fully admit that I stay creeping.  I’m all about that screenshot/right click + save as lifestyle.

But what I’m not doing is badgering people with my thirst because I was never taught self-control.  Get it together adults.  Make sure these kids know how to act both in real life and on the internet.

Lena Dunham’s “Comedic” Sexual Awakening
I’m going into this having never watched an episode of Girls and only knowing two things about the show.  People either think the show is quirky funny or horribly racist.  And that they used Lady’s “Yankin” on an episode.

I laugh at that .gif constantly.

But anyway, Lena Dunham, the show’s creator and noted hunchback released her book this year with a problematic passage about her sexual “awakening” in the presence of her younger sister.

I’m not here to defend nor condemn this woman (who has proven that she wants to be treated with kid gloves while praised for her edgy and different she is).  I want to talk about over-sharing.  Most of the praise that I’ve read about Lena’s work is that it truly comes from her life and experiences.  The show may be an obnoxious show about privileged white hipsters but that’s her life and experience.  I recall there being a lot of praise for showing her body which isn’t “Hollywood-sized” as well.

The impression that I’ve always gotten is that she thinks that acting like a little girl is cute and has gotten by with this approach. 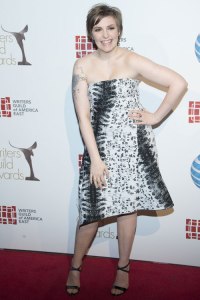 Why else wouldn’t she stand up straight?

When I read that passage and the resulting media explosion, my only thought was why put this in the book?  Why do you we need to know this about you? Again, I gather that she thought this would make her look more quirky and different. Oh, look at this weirdly curious 6 year old girl who just wanted to know what her vagina was doing!  Isn’t that adorable?!

See it’s not.  At least, a 28-year old woman tells the story isn’t.  This is the kind of attention seeking story that she thinks will “totally piss off the stuffy old people of today. I’m so edgy.” When in reality, stories of the sexual awakening of a child aren’t something we as a general public need to know. Curiosity about the body isn’t gross, in and of itself, but putting out it as a light-hearted comedic joke was never going to work.

Now her sister has to live the rest of her life with the world knowing her sibling touched her genitalia, whether it was sexual or not.

She had to know that sharing a story about touching her younger sister’s body was going to get her labeled as a child molester, truth or not.  Her “rage” at the controversy is totally unearned.

And by the way, if you were a little kid and never looked at another little kid's vagina, well, congrats to you.

I told a story about being a weird 7 year old. I bet you have some too, old men, that I'd rather not hear. And yes, this is a rage spiral.

You want to tell a story about being a weird 7-year old? Talk about actual events.  (I jumped out of the car after we got in an accident and told a police officer to arrest a man for spilling my soda.)  Talk about interaction with your family. (I was given a puppy by my father and proceeded to walk away saying that I asked for a Nintendo.) There are some things that just don’t need to be said because no matter the context, it doesn’t read well.  It speaks to her lack of maturity and refusal to take responsibility for her own actions.

Her editors didn’t think this would be a scandal.  But I guess it got people talking about her book, so there’s that.

(Seriously, she’s 28? Someone get her a multi-vitamin or a spa day. Girl looks rough.)

What are your thoughts?  Are you the one sending nasty pics to Tyga’s DM’s?  How dumb is Lena Dunham? Let me know in the comments.