So the BET Awards happened last night!  And you know what, it was an entertaining show!  I mean I’m clearly going to shade your faves, but there clearly was some real effort and intent into the production and decisions.  It showed and I’m honestly impressed.  But let’s go through some of the moments and performances! 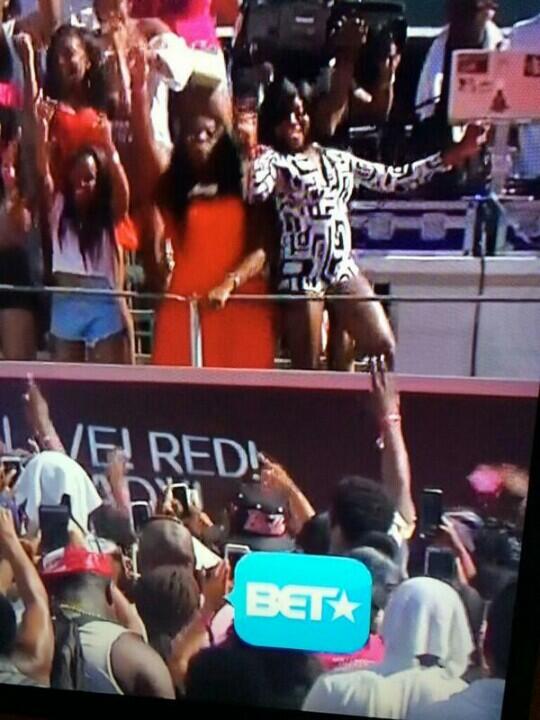 But let’s first pay tribute to this diva who clearly got her life from every pre-show performance.  I was completely here for her.  Show out diva!

The show opened with Pharrell performing Come Get It Bae.  While I love Pharrell, his reticence leads to somewhat dull performances. Although I enjoyed him dropping it to the floor.  But then he brought out MISSY ELLIOTT and things became so important.  Listen, I’m going to address Nicki Minaj later but Missy Elliott is part of the reason that Nicki falls flat because she’s such a fun and engaging artist with a catalog of HITS!  She’s flawless and immediately brought energy into Pharrell’s show.  Fantastic.

Chris Rock hosted the show and did a fantastic job.  Full stop.  His opening monologue and bits during the show were funny, if a bit forced.  I loved the bit of him at the Monster Truck Rally and the play on Ellen’s pizza with Roscoe’s Chicken and Waffles.  While it was no Mo’nique slaying Beyoncé’s choreography, it was a lively show in part thanks to him.  Although, poor Rick Ross took the brunt of his jokes.  Oh well!

Nick Cannon continued his pursuit to become the lamest man on the planet.  Showing up with leather pants, a pick, and a thirsty afro, he appeared to make Zendaya uncomfortable.

John Legend then performed, singing beautifully and glowing because that’s just what he does.  But then, tragedy.

If you recall, this is how Class & I both feel about Jhene’s supposed vocal talents.  She strutted out there swaying and bopping while missing all 6 notes of that “The Worst” song.  Like I just don’t understand why she’s so bad live.  And this is coming from someone who enjoys Cassie!  She’s seriously so blah and seeing people go up for her irritates me.  She was up there struggling and failing to impress the judges when John Legend jumped in to sing with her and scalped her in TWO lines.  TWO. He didn’t even break a sweat.  Goodbye girl.

Chris Brown performed Loyal and I just can’t be bothered.  I can’t remember if I mentioned it in my post, but he seriously comes across as dead.  The dance moves seemed lazy and he came out in red plaid which would be a theme for the night.  But his voice isn’t where it used to be and Loyal, while catchy, just isn’t a song that I’m ever going to see it for without several cocktails and a dance floor.  However, this tweet (Retweeted from MissJia took me out of the game)

ma'am RT @bigshitxtalker: He cut up at the end. Vocals still ain't loyal but he cut up. Gon head big Chris. pic.twitter.com/lLfXLnZTK3

But then, Usher came out to remind us that he has hits on hits on hits.  Although, that curious coon skin cap was not the business.  Seriously, the Confessions album by itself could have been a 20-minute performance.  We could have cut freaking Jhene for more Usher.  And just when I thought the performance couldn’t be more fun…

Listen.  This young diva hopped on stage with her boots and proceeded to herk and jerk about to my endless delight.  Love her.

Jennifer Hudson performed a song and I seriously always feel a little bad for her.  She can sing and she has style but her song choices either feel tedious or forced.  She was in a leather mini-dress that was not flattering and seemed to be going for Studio 54 meets Patti Labelle and it just didn’t work.  But she didn’t bring out David BaeIntosh in sheer panty-drawls.  So a win is a win.

Okay, let’s talk about Nicki Minaj.  She came out to perform that “Pills & Potions” song with an Alice In Wonderland set.  The performance, like the song, was mediocre.  I say this, knowing that I actually don’t really mind her these days.  Her make-under is truly one of the best image reinventions in recent memory.  That plus Lookin Ass had me thinking that perhaps we could co-exist.  But I do feel like while Nicki has the ability to be a dope lyricist and certainly has some creativity, her performance come across very middle school play.  There’s a lack of polish in her “art” that makes it childish and less impressive when compared to her contemporaries.

Think back to her Catholic mess at the Grammy’s.  She felt like that was going to be shocking and say something, but really it was just off-putting and uninteresting.  With the childish set and the fact that Pills and Potions just isn’t an interesting summer song, it was blah and made her later comments seem even more petty.

It’s why her Beez In The Trap performance from 2012 was so good.  Taking out all of the “art” forced her to rely on her rhymes and presence and the performance was better because of it.  Also, this.

We’ll come back to Nicki coming for Iggy later.

Okay, next August Alasia, Trey Songz, and Chris Brown came out to make the young ladies and gays of the world moist.  Asian Sensation, who you may remember from our NFL Draft post, loves her some August.  I don’t particularly mind him, but he’s so fun to laugh at.  With that said, his performance was fine.  He may have a limited vocal range, but he works what he has well.  He reminds me of a Lyfe Jennings, but for those who didn’t live through dial-up internet.  It’s also further proof that Trey Songz, fine as he is, sounds like shit live.  Chris still sounds like he’d rather be having a root canal.

We then got Trey Songz performing Na Na and yeah, the performance is better watched on mute.  OOOH, but do you remember when he sang for Prince????

Prince’s pursed lips of judgement will continue to get us all through the day.

We then got to the Lionel Richie’s tribute.  Or should I say Ritchie?  Really, BET?? I just can’t with you.

But John Legend, Ledisi, and Yolanda Adams did a bang up job.  Especially Yolanda who brought the house down.  Lionel then gave an airy fairy speech before blessing us with All Night Long which by FAR my favorite solo song of his. (Zoom by the Commodores being my all-time favorite.)

So T.I. and Iggy Brazilia performed “No Mediocre” which led to Iggy’s Fancy. T.I. has perfect teeth and wore a parka.  Iggy mumble rapped her way though and sat on a lawn chair.  It was fine for what it was.  But let’s talk Iggy.  She is the target of a lot of hatred a la Macklemore, for adopting a “blaccent” for her raps and some racist tweets earlier in her career.  Essentially, the running commentary is that she is a parody of hip hop who has been elevated because of her skin color.  I get not liking her because her catalog is mostly mediocre and the tweets, but her adopting a rap persona doesn’t phase me at all.  L’il Kim’s nor Foxy Brown’s natural voices were nearly as gruff as their songs.  And whether you like it or not, Fancy is one of the songs of the summer.  It’s catchy, it’s fun to sing/rap along to, and Iggy sells it.  The execution of her Clueless-inspired video is killer.

But back to Nicki coming for Iggy’s writing credits and authenticity.  Girl. Good. Bye. I don’t say that because I’m some huge Iggy fan or anything.  But to come for someone who is having career success when you’ve just beaten her for an award is petty.  It doesn’t make you look good.  It doesn’t speak well for your belief in YOUR career.  And to have Nicki Minaj come for anyone on the grounds of authenticity when she has run around for a good 5 years wearing multi-colored quick weaves, speaking in tragic accents, and calling herself a Barbie just reeks of a lack of self-awareness.  Writing all of those lyrics gave us Stupid Hoe and Twinkle Twinkle Little Star.  So good for you?

The night became more flawless with a male R&B group reunion of sorts featuring Troop, Color Me Badd, and Silk!

Listen.  I screamed.  I just wasn’t ready.  This was a huge win.  Of course, this led to me wanting a bunch of other groups for it.  All-4-One, Tony Toni Toné, Shai, Blackstreet, Jodeci…  I would have died.

A tribute to Ruby Dee and Maya Angelou orated by Phylicia Rashad was stunning and well done.  This is what I meant when I said that the awards did a much better job of paying real tribute to real people in a respectful way.  Medger Ever’s widow delivered a beautiful speech as well.

The show closed with a YouTube of Beyoncé & Jay-Z performing Partition at their tour.  This isn’t the first time they’ve done this and the disappointment of so many fans was hilarious.  I didn’t pay a ton of attention because I’m seeing them in 2 weeks.

And that’s that?  My favorite performances were Yolanda Adams and Usher.  Seeing Paris Hilton there was hilarious.  Robin Thicke’s “public” plea for Paula Patton is awkward and uncomfortable.

Here are some of my favorite tweets from the night.

why y'all?? RT @IAMTAYLORHALL: I hate black twitter lmao!!! 😂😂😂 pic.twitter.com/YGIdPVJy4w

Y'all. Come on. RT @JaeJeter: Dude in the brown wanted that Roscoe's SO BAD LMAO YALL SAW HIM? #BETAwards pic.twitter.com/h8xaIrmeV9