Let’s start this off with your Black History Fact of the Day! 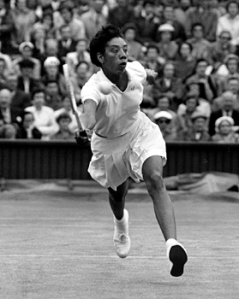 Althea Gibson was an American tennis player and professional golfer, and the first black athlete to cross the color line of international tennis. In 1956, she became the first person of color to win a Grand Slam title (the French Open). The following year she won both Wimbledon and the U.S. Nationals (precursor of the U.S. Open), then won both again in 1958, and was voted Female Athlete of the Year by the Associated Press in both years. She won 11 Grand Slam tournaments, including six doubles titles, and was inducted into the International Tennis Hall of Fame and the International Women’s Sports Hall of Fame.

So if you think back to the first episode of Empire.  We opened with this song.

I’ve been listening it non-stop ever since.  I love her voice, I love the harmonies.  SO GOOD.